Solar Works Near or Far

Solar works on the roof, ground, or in a field far afield.

The 75% decline in the cost of solar panels over the past 10 years has turned solar into a practical investment that is accelerating New England’s transition to clean energy. Whether purchased upfront or financed, whether you own your home or rent, solar technology can help your household, business, or organization save money and the environment.

This section of the guide covers many of the solar options available today. There is a viable way for everyone to go solar!

The Basics of Rooftop Solar

Rooftop solar is what people often think of when they hear ‘solar,’ and it is ReVision Energy’s most common installation. But after twenty years there have been advancements in the way we approach rooftop solar as equipment prices decline and electrical/fire codes become more rigorous.

Any roof that faces between southeast and southwest makes a great solar roof. If you want to get scientific, use a compass to see which direction your roof faces. The perfect solar orientation in New England is 195 degrees (15 degrees west of due magnetic south on a compass, also known as ‘true south’) but any orientation between 150 and 240 degrees is within 10% of perfect.

With that said, as equipment costs have dropped, our tolerance for off-axis systems has increased somewhat. For example, a solar array that is positioned due west may (depending on the roof slope) harvest within 20% of its ideal annual production. Since much of a solar project’s total cost is fixed overhead (electrical connections, inverter, permitting, getting a crew on-site, etc.) it may be possible to simply add extra solar panels on a strongly east or west facing roof to make up for the production loss. You will still see a very strong ROI for your solar project. Because solar panels have become relatively inexpensive, adding additional solar panels does not significantly impact the fixed costs of the project but allows you to generate more power (and, accordingly, more savings). 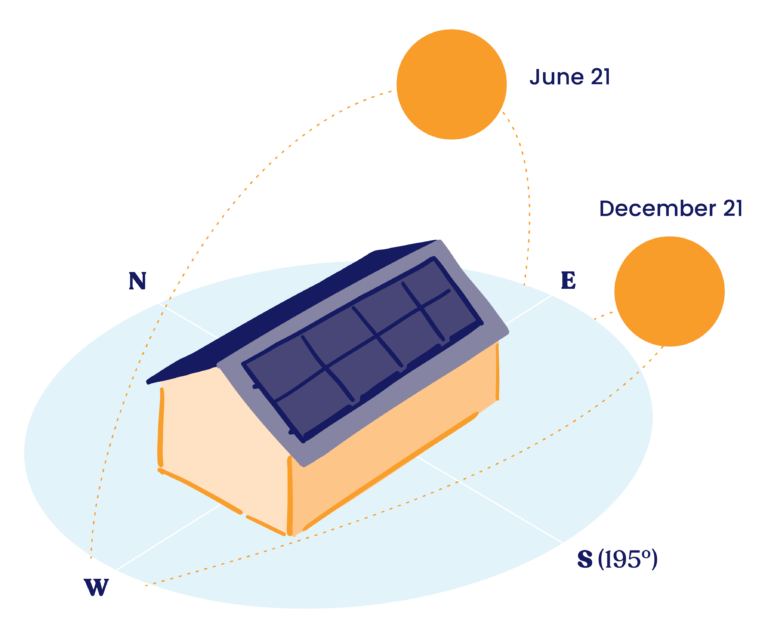 What about the slope of the roof? Most common roof pitches, e.g. 4/12 to 12/12 are fine for solar and do not significantly impact the overall yearly solar harvest. More extreme angles (mounting on a flat roof or an awning mount) require special hardware but are also good options in many cases.

See the graphic below to understand how this all fits together. This image compares the relative height of the sun in the skyline, to its orientation, at various times during the year.

Ideally, we like to see a shade-free solar ‘window’ between 9am-3pm, year-round. When evaluating your site, a solar professional will use a tool such as a SunEye. These tools take a fish-eye photo of the open sky and then super-impose the sun’s arc (adjusted for longitude) as well as any tree coverage onto the open sky photo. The results can be interpreted by software to develop a percentage figure of available solar access at a site (a sample rendering is pictured below). 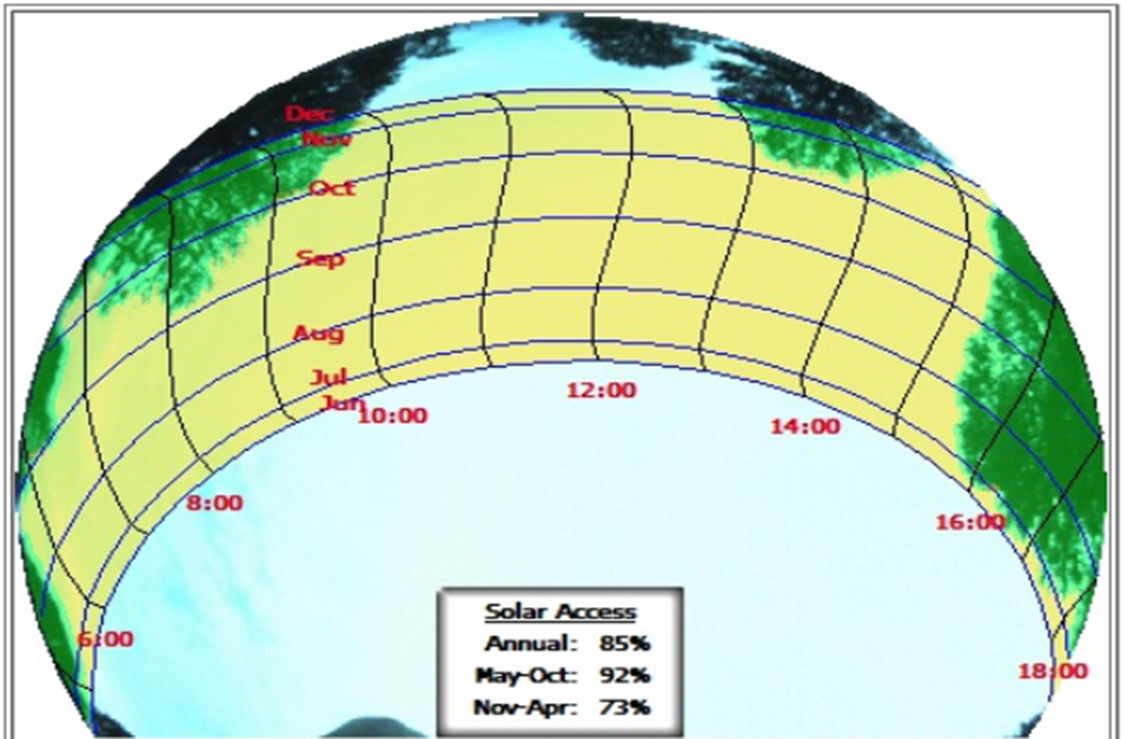 Any significant shading during the ‘peak’ hours of the day will affect solar production and reduce the system’s ROI, but because ReVision Energy employs module level optimizers on most of our residential projects, solar systems are more tolerant of partial shading than ever before.

Our Solar Design Specialists work hard to design the optimal solar array for every home we visit. When rooftop arrays are not possible or ideal, we can easily find other options, such as ground mounts.

For all those situations where a rood mounted system is not viable or wanted, another option is to install solar panels on the ground. Our Ground Mount array design and install team enables customers with unideal roofs to harness the power of the sun for their homes or businesses.

Due to the need to survive decades of punishment from harsh winters, ground-mounted solar arrays must be built particularly tough in the Northeast. The footings and wire management system must be able to handle hundreds of freeze/thaw cycles, and the panels must be able to withstand uplift from the wind, multiple feet of snow, and pummeling from rain and hail.

Historically, that has meant that ground-mounted systems in the northeast involve heavy excavation to pour large concrete footers to support the solar array. The concrete work is not only carbon-intensive and disruptive to the site, but costly. As a result, ground-mounted solutions have historically commanded a significant premium over roof-mounted projects of a similar size. 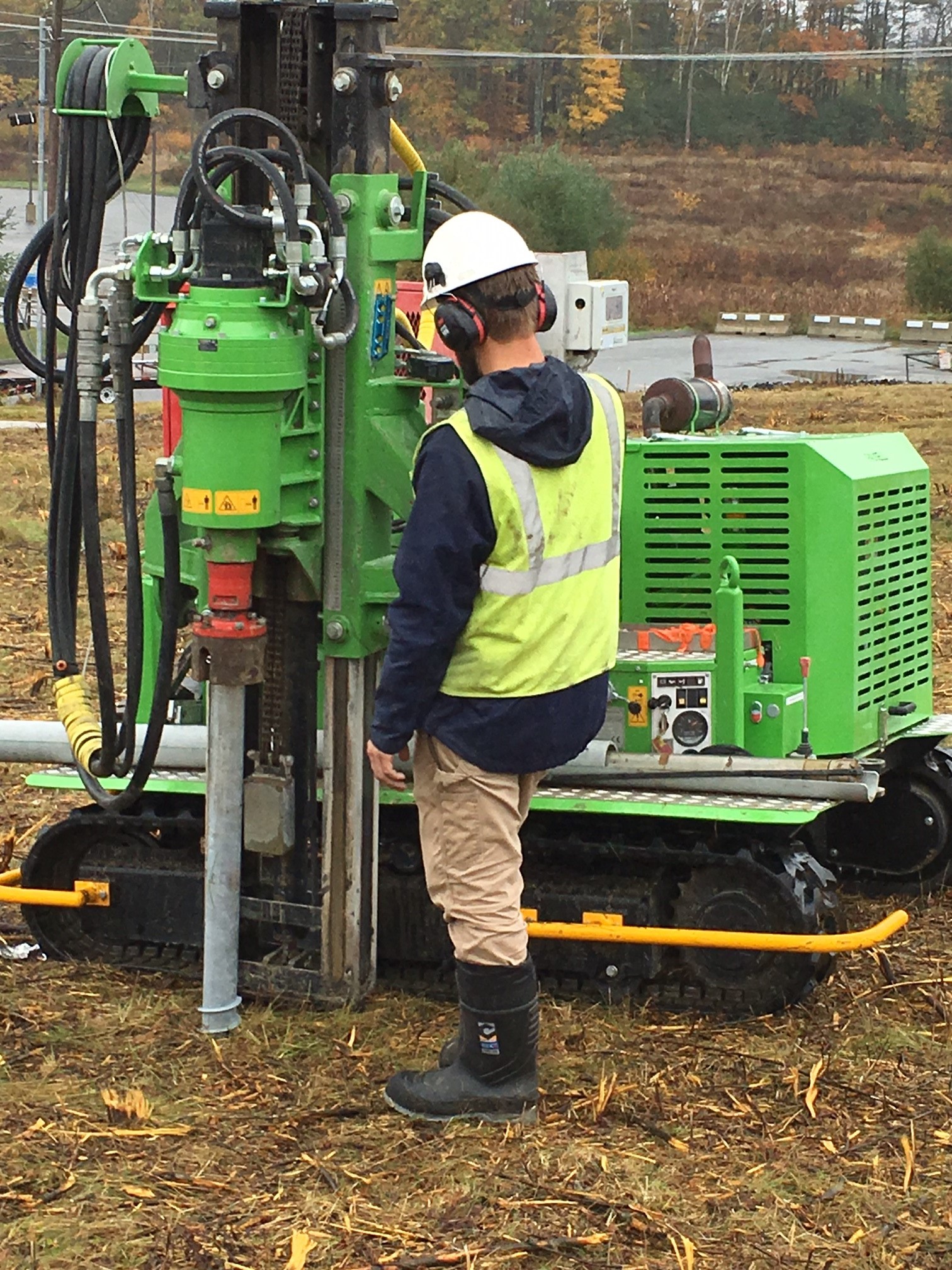 Our engineering team, not to be deterred by the challenge of marrying absolutely perfect product performance with a need to reduce costs and gain efficiency, has evaluated hundreds of racking and foundation solutions over the years. In 2016, we made an investment that significantly improves our ability to install ground-mounted arrays: a Pauselli 900 solar pile driver, which allows us to install pile-driven posts or ground screws for solar arrays without the need for any concrete.

With the new equipment in play, our premium for installing a ground-mounted solar array has dropped by over 26%, to the point where in some instances the ground mount solution will be cost-competitive with roof mounted installations.

Some advantages of ground-mounted arrays compared to roof mounts are:

Available in Maine, Community Solar Farms offer home and business owners to receive the many benefits of solar without the need to install solar panels.

ReVision Energy’s most common approach to Community Solar Farms, or CSFs, is a member-ownership model similar to Community Supported Agriculture (CSA). Rather than building the solar array on site at their own home (growing your own garden), a CSF shareholder invests in a solar project somewhere offsite and gets credited for that solar energy (getting veggies grown by a local farm). ReVision is also involved in building subscription-based CSFs, which you can learn about here. 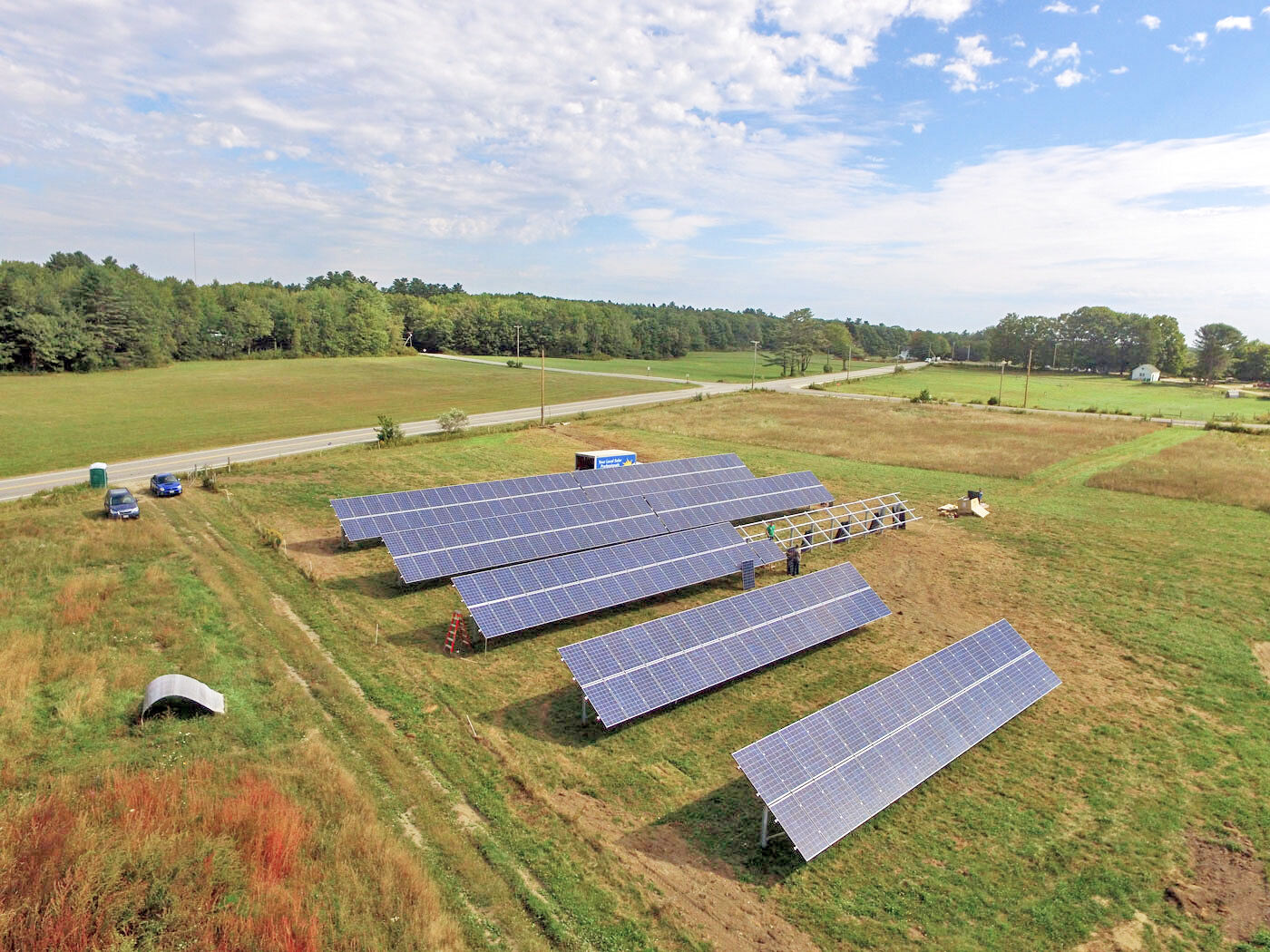 Thanks to pro-solar legislation in Maine, solar farms can have 100+ members, where each member receives a share of solar production from the total array relative to their percentage of ownership in the Farm.

Billing-wise, a CSF share works identically to having solar production at your home. 100% of the solar electricity generated by the solar farm is sent back to the grid. Each shareholder gets a credit—based on their percentage share—that is automatically applied to their utility account, which can accumulate for up to a year and be used for any electric load, whether that be heating water, heating the home, or powering an electric car.

The CSF share is utility-specific. Should you move within your region and stay with the same electric utility, your CSF share simply transfers with you. Should you need to move out of the region, your CSF share can be transferred to a new owner. ReVision Energy maintains a long wait list of people eager to buy out existing CSF shares and can help set up the transaction.

When we discuss solar with a prospective customer, we need to know a lot about them in order to design a system. For example:

In addition to offsetting household electric bills, we look at every opportunity to reduce dependence on oil or gas by converting water heating and space heating equipment to solar, as well as storage options for solar battery backup. A very powerful reason to go solar is the technology's ability to be used in many ways and transform your house into a more renewable, energy efficient home.

Solar can be Stored, and Heat & Cool your Home →