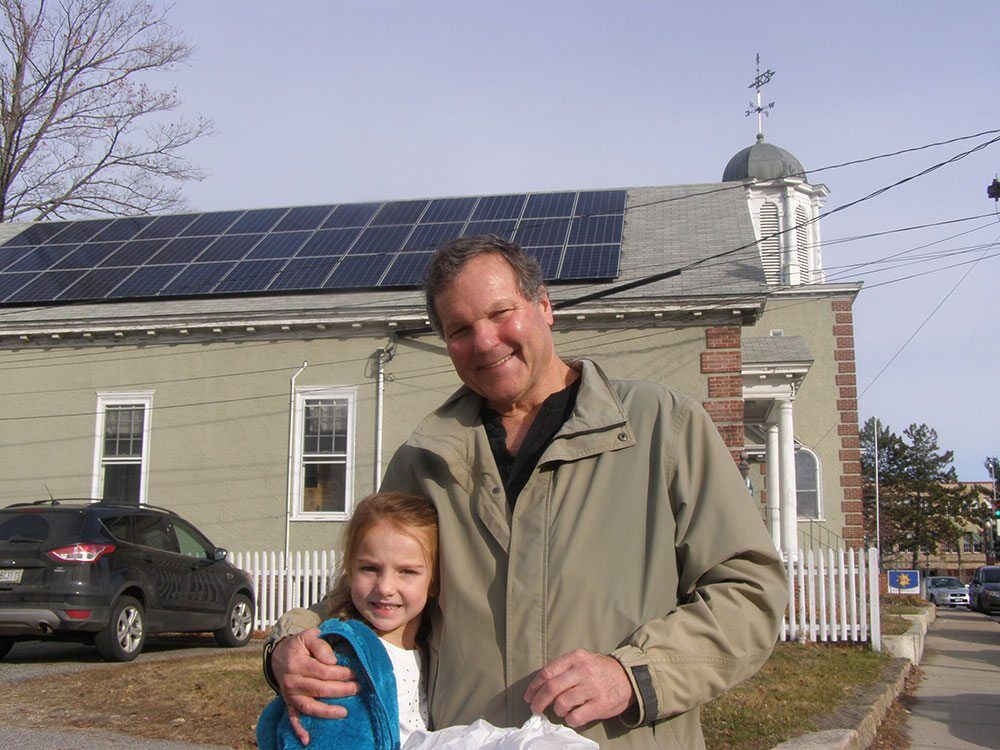 Solar investor Arthur Dumas with his grand-daughter in front of the 100-year old Unitarian Universalist Church in Sanford. Dumas is the investor in the project, meaning he funded the project and the church pays him for energy produced by the system. Arthur and his wife Celina invested to "help make a better environment for future generations."

A "small but mighty" congregation, the members of Sanford's Unitarian Universalist Church were faced with a big decision as their historic church reached its centennial. Do they look at a new location, in a more efficient and modern church, or tackle the energy challenges of a 100-year old building?

Ultimately, the congregation chose to update their existing building, creating a "Second Century" committee who was tasked with finding ways to responsibly update the church and tackle some of its major energy problems.

"Once we dug into the project, we saw we needed well over $200,000 in energy improvements," said Howard Dupee, a member of the Second Century Committee, "Some of those were less visible but very important - such as improving the insulation throughout the building. Some were more ambitious, such as figuring out what to do with our 1950s-era steam boiler. We looked at every option out there, from gas to pellets, to solar. The more we dug, the more we kept coming back to solar."

The Second Century Commitee reached out to ReVision Energy, who were able to provide them with a compelling project: the installation of solar PV generation on the roof, reducing the Church's electricity bill, and the installation of heat pumps (powered by the solar), which would dramatically reduce their dependence on oil.

Solar for Nonprofits: A Needle to Thread

While homeowners and businesses can enjoy a 26% federal tax credit on their solar investments, Sanford UU found that as a nonprofit, they could not. So part of their solar discovery process was exploring alternative arrangements that facilitate solar for nonprofits.

ReVision Energy connected them with St. Ansgar Lutheran Church in Portland, which had accomplished the kind of project Sanford UU wanted to do. A dedicated congregation member (ReVision customer Deb McDonough) had become the private investor in the project, purchasing equipment and paying for the installation of solar on the roof of the church. Under the terms of a Power Purchase Agreement (PPA), the solar generation from the system is sold to St Ansgars at market rates, the investor is able to take advantage of tax credits available to private entities, and after 7 years the church has the option of purchasing the system outright for a significant discount vs. the full retail price of the system.

Inspired by this model, Sanford UU found members within their own congregation - Arthur and Celina Dumas - who were willing to invest on behalf of the congregation. Asked about his motivation, Art said, "It made sense to help make it happen and hopefully encourage others to follow in the footsteps of our forward thinking congregation."

With an investor in place, and a great roof for solar, the Sanford UU's solar array was built in December, 2015.

On the morning of Saturday, April 30th, the morning after the defeat of LD1649, a small but bright-eyed group gathers in the meeting-house space of the Sanford UU Church to learn about the solar array. The talk thus far has been about contracts, energy savings, investments, kilowatt-hours. Then Reverend Sue Gabrielson steps up to speak.

Rev. Gabrielson opens with a quote from Jane Goodall:

We seem to have lost the wisdom of the indigenous people, which dictated that in any major decision, the first consideration was 'How will this decision we're making today affect our people in the future? These days, decisions are made based on the bottom line.

Gabrielson then goes on to reflect on the loss of LD1649, again looking for wisdom to reflect upon our current situation, quoting Dr. Martin Luther King Jr.

The arc of the moral universe is long, but it bends towards justice.

And now, she speaks on the true reason that all this work has happened, and why this group of people is spending a jaw-droppingly sunny spring morning talking about RECs, kilowatt-hours, and contracts. This technology is a way we can fulfill our obligation, as humans, to be good stewards of the earth.

"People of faiths - all faiths - have a mandate to be good stewards of the earth God has entrusted us with," says Rev. Gabrielson, "To date, we have not done such a good job at that. This project is our way to be a little better."