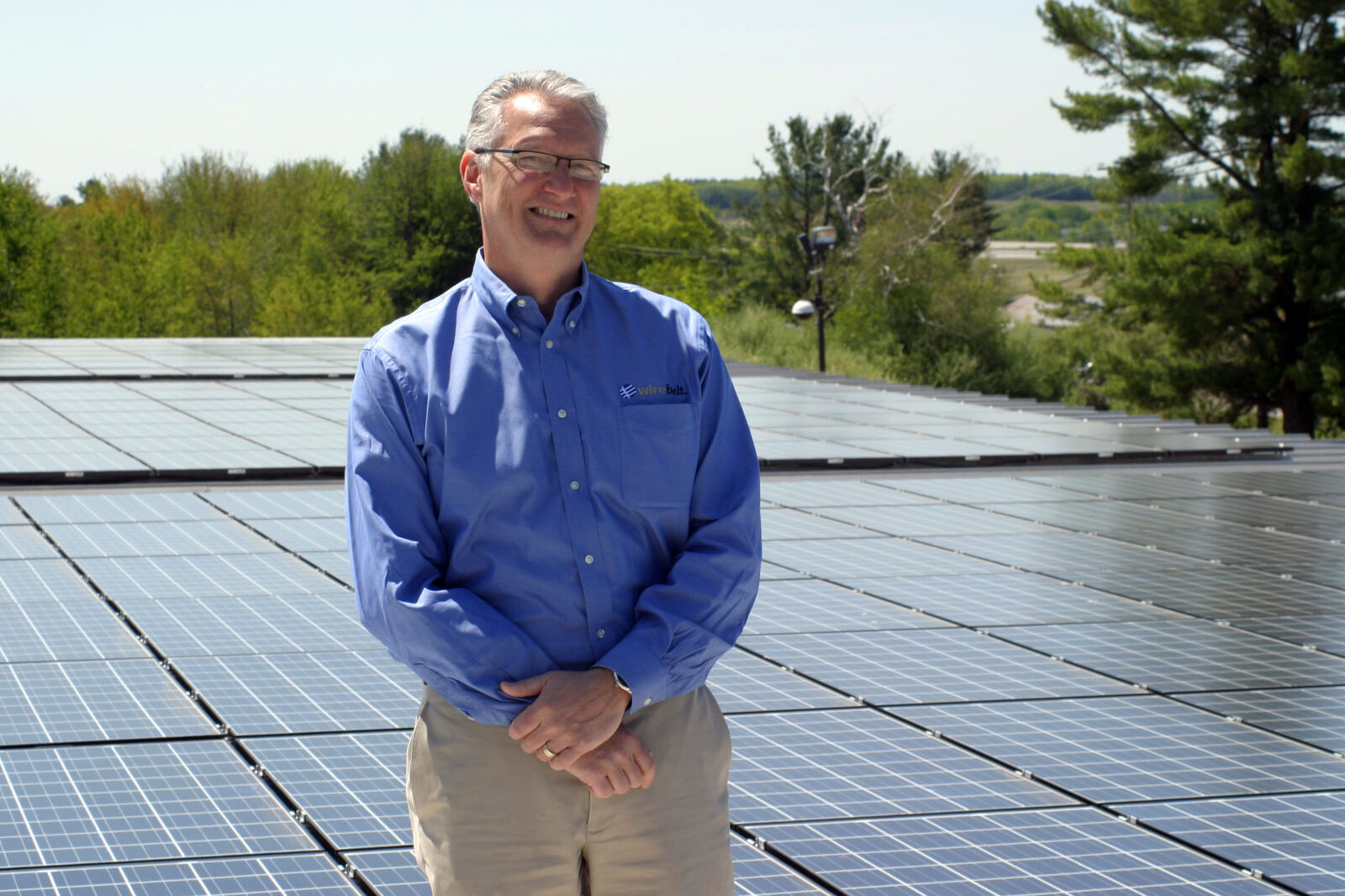 Wire Belt Company of America CEO David Greer on the rooftop at his Londonderry facility.

With two solar thermal systems and a 150-kilowatt photovoltaic array, solar energy has become an integral part of the manufacturing process at Wire Belt Company of America . ReVision Energy recently completed the expansion of the manufacturer's existing rooftop solar array by 51 kilowatts. At the time of its initial installation, Wire Belt's 100-kilowatt array was the largest in the state.

The Londonderry, New Hampshire, company manufactures customized conveyor belts, mainly for the food industry. McDonald's Chicken McNuggets are processed using the company's conveyor belts. The belts are also in use at Dunkin' Donuts, Quizno's and many pizza chains, including Papa Gino's and Domino's.

The expanded solar array will boost the company's ability to hold down operating costs and will further its goal of eventually offsetting 100% of the facility's energy use through renewable technologies, a milestone already achieved at the company's facilities in Germany and the United Kingdom.

Wire Belt is a fourth generation, family-owned business and is one of only a few manufacturing facilities to achieve ISO 14001 registration, an international standard certifying the company's commitment to the environment and its pledge to reduce, reuse and recycle natural resources.

Wire Belt CEO David Greer is a passionate solar energy advocate. With a background as an engineer and a conservationist, he says solar "just makes sense." His interest traces back to paying his first electric bill. Solar electric and solar thermal systems are also in place at Greer's New Hampshire home.

For a manufacturing facility like Wire Belt, solar energy curbs high utility and operations costs. "Manufacturing companies have many cost centers, and electricity can be a large cost," according to Greer. "Anything we can do to drop our expenses helps to keep us competitive. Generating (theoretically) 40% of our own energy is like a huge relief valve. It is a cost center that we no longer really worry about, no matter what the electric utilities do with prices."

Prior to investing in solar technologies, Wire Belt controlled consumption through the creation of an internal Energy Conservation Committee. Installing high-efficiency lighting, using occupancy sensors wherever possible and replacing the company's HVAC system allowed Wire Belt to cut energy usage nearly in half. As Greer says, "I learned early on that the cheapest electricity there is, is the electricity you do not use."

Wire Belt's mission is to grow manufacturing in the state by operating as a lean, green, values-driven team. Solar energy improvements have paved the way for Wire Belt to pursue those values, and the company has received positive feedback for its efforts. The solar installations are a point of pride among employees. Greer says customers also view Wire Belt as an example for the manufacturing industry. "Many of our customers are very pleased. Some have said that they truly appreciate companies like ours, and want to do business with us."

Greer has written articles promoting solar and believes outreach is important. "Overall, I am a conservationist. I believe that we should conserve and watch what we use and leave as small an impact as possible on the earth while not shutting down industry. Nowadays, capitalism is looked at as a bad thing by some. I try to be an example to my employees, customers and the community that there are good companies out there, just trying to do the right thing."