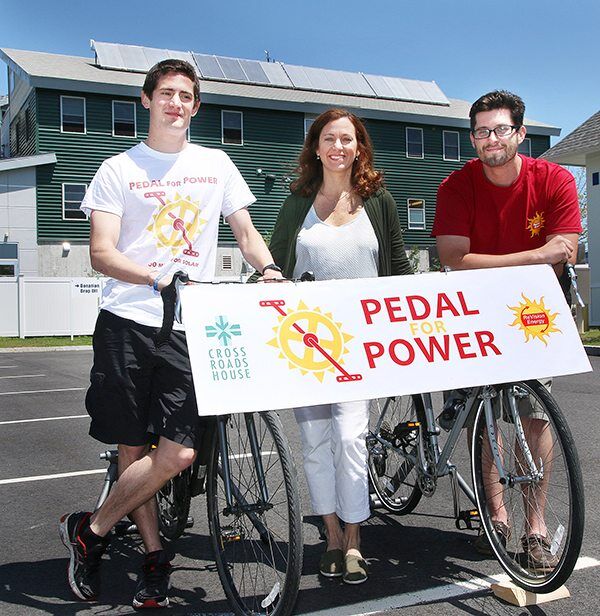 Brentwood, N.H. (November 3, 2016) - After a two-year fundraising effort, a Seacoast homeless shelter will soon be powered by the sun. A solar electric array will be installed at Cross Roads House in Portsmouth over the course of several days, beginning November 10th. The transition to solar power will save the shelter thousands of dollars per year.

The project is the result of an effort created by ReVision Energy's Chris Pamboukes and his cycling partner Josh Andrews. The pair launched the Pedal for Power campaign in 2014, intent on turning a bicycle journey into an opportunity to give back to the community and to create a lasting impact along the Seacoast.

Pamboukes and Andrews had two ambitious goals: a 2,000-mile bicycle trip from Vancouver, British Columbia, to San Diego, California, coupled with a fundraising effort to cover the cost of a solar array at Cross Roads House. The trip lasted five weeks, allowing for stops along the way.

The pair eventually raised $12,000. In addition to the donated funds, the project will also benefit from a rebate from the New Hampshire Public Utilities Commission and a generous grant from the Thomas W. Hass Fund managed by the New Hampshire Charitable Foundation.

Pamboukes says his team's effort is part of a larger strategy. "It boils down to finding a way to benefit the environment and people in need while also setting an example of how we can revolutionize our energy infrastructure. Pedal for Power was inspired by a call-to-arms to assist in climate instability and economic instability. Josh and I found a clever way to do our part, and we really hope it may inspire others like us to find their special way to do their part too."

ReVision Energy will provide needed materials at cost and will install the 18.15-kilowatt rooftop array by utilizing employees who volunteer. As a benefit of employment, ReVision Energy employees are paid up to eight hours per year for community service.

ReVision Energy General Manager Dan Clapp credits Pamboukes and Andrews for the project's success, "though the final push to ensure the installation is completed is a direct reflection of company identity. This is one way that ReVision lives up to our B Corp values, being a company that does good in the community."

The array is expected to generate approximately 23,400 kilowatt hours of solar electricity each year. The conversion to solar power is expected to save Cross Roads House approximately $3,700 in annual electricity costs over the next 30 years, and an additional $700 each year from the sale of renewable energy credits, which represent the environmental attributes of power produced by renewable energy projects.

Cross Roads House Executive Director Martha Stone says, "We are so excited and very grateful that the Pedal for Power project started by Chris and Josh is becoming a reality. Their dedication and commitment has been remarkable. With the generous support of ReVision Energy and the many donors who supported this project, Cross Roads House will benefit from this solar array with a significantly reduced electric bill for many years to come. Given that most of our operating budget comes from donations, every dollar we can save on shelter expenses is important to us."