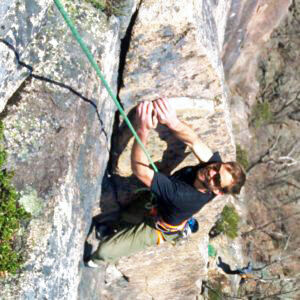 Thomas grew up on a small island in Penobscot Bay with a year-round population of about 600 people where his father was his math teacher. He grew up understanding self-sufficiency as simply part of island life. When he was 16 he got an entirely new perspective on resiliency and community after his family switched places with the math teacher's family in Herschel Village, South Africa, as part of a Fulbright teacher exchange program.

Thomas earned his BS in Economics from the University of Mary Washington in Fredericksburg, Virginia where he was the captain of the soccer team. After graduation he backpacked through South America, working in a design school for sustainable habitats, an artists cooperative, and multiple permaculture projects. He lasted 6 months before parasites and days on the road took their toll but he took many lessons about sustainability with him - not to mention a new-found appreciation for the Incan's stoneworking skills and worship of the sun. Thomas jumped back into the family landscape/gardening/stonemasonry business when he returned to Islesboro and built a solar powered workshop for Hatch and Son's.

Thomas moved to Portland in 2013 with the goal of getting involved in renewable energy. He became an Energy Advisor at ReVision Heat, tasked with helping Mainer's save money on their energy bills and reduce their carbon footprint with practical investments in home heating and energy efficiency. He joined ReVision Energy in 2015 as a solar and heat pump design specialist and loves getting to climb around on roofs and communicate the many benefits of solar electricity to anyone who will listen. In 2017, Thomas bought his first home in Portland and immediately installed two heat pumps and a heat pump water heater, ripped out the gas boiler, insulated the basement, and air sealed. Thomas achieved a longtime dream of powering his own life with clean energy in 2019, when he installed 24 panels on his roof with help from his incredibly talented friends and co-owners. His 1928-built cape is now net-zero with no fossil fuels in the house! He is plotting the next move to eradicate them altogether from his property with an electric vehicle.

When not helping Mainers get off of fossil fuels, Thomas makes Resurgam fermented hot sauce, plays soccer and basketball, climbs, and explores the outdoors as often as he can by snowboard, ski, boat, bike, and foot.