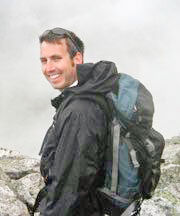 Josh grew up in Midcoast Maine and joined Revision Energy in the summer of 2008. He is now a commercial project manager and a master electrician.

Josh graduated from Northeastern University with a degree in geology, and spent several years working in the environmental science field before deciding that he was able to make a far greater impact on the environment through renewable energy.

Josh's interests outside of work include sustainable farming (he has spent a year farming in the US and New Zealand through the WWOOFer program) and many outdoor activities - most notably backpacking and mountain biking. Josh has a great affinity for wood heating, which is one of New England's best resources along with ample solar!

Josh bought a duplex on Portland's Munjoy Hill in 2010 and now has a 3 kilowatt Sunpower PV system scavenged up from stranded inventory in the warehouse. The PV system covers his electric bill and his unit is heated primarily with wood. He also has 3 Wagner solar hot water plates that cover most of the hot water needs for both units of his house.