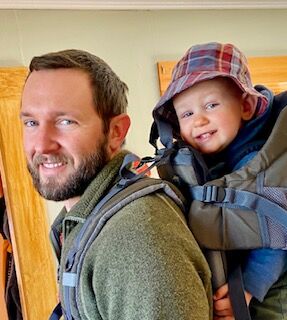 John was born and raised in Bangor, Pennsylvania. He grew up vacationing in Maine and when John graduated high school, he had applied to two colleges, both of which were in Maine. One look at Unity College and he was sold. After Johns first year in Unity, he never returned to live in Pennsylvania. Graduating with a B.S. in Wildlife in 2008, he worked in North Dakota for Duck's Unlimited for a year and eventually found himself guiding Duck Hunting in South Texas for 3 winter seasons. The rest of the time he worked landscaping in and around the Unity area.

Eventually, after farming for a few years, John planted his feet at ReVision Energy in Liberty, ME in 2017. He began his career at ReVision installing solar arrays, soon after becoming a crew lead and safety manager, and now is a Project Manager for new construction and small commercial jobs.

John lived off grid for 10 years, with his now wife of 5 years, in a very rustic log cabin with no electricity or running water. A couple years ago John started a family and bought a house in Unity, Me. He is the proud father of a son and daughter and thinks two is a great number. When not spending time with his family, John loves to fish, hunt, swim, hike, and play yard games with friends.