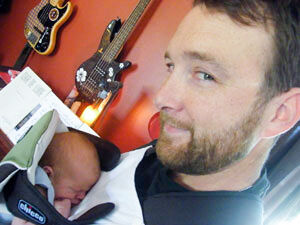 Jerod was born and raised in the southern reaches of central Ohio, where the glacial plain meets the edge of Appalachia. From his youth through college, he worked for the family roofing business off and on and very nearly ended up in the solar business in the late 90s when his family was heavily interested in expanding into PV installation.

While attending Ohio University, Jerod joined the Ohio Air National Guard following the events of September 11th, where he served as an avionics specialist. He ultimately graduated from Ohio University with a bachelor's degree in Aviation and Management. After his wife Julie finished graduate school later the same year, they packed up the cats, left Ohio and, as luck would have it, their new landlord worked for a very ambitious local solar company. It just so happened to be the height of New Jersey's solar heyday and Jerod began a new adventure as a solar installer.

Jerod and Julie were married in 2011 in Georgetown, the town where Julie had spent her summers since childhood. The two sought the opportunity to relocate and in April of 2013, Jerod joined our Liberty-based installation team. They are proud to call Whitefield home and have since had two beautiful children who will get to grow up enjoying the wonders of Maine that captured Julie's imagination as a child.

Jerod currently oversees both the PV and thermal operations in Liberty. Outside of work, he enjoys kayaking, fishing, hiking, and simply spending time with the family.