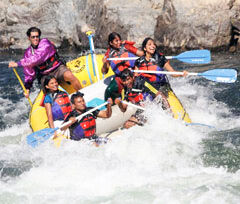 While Chris studied Media Communications at Champlain College in Burlington he also pursued his interests in outdoor recreation. Cycling, swimming, ultimate Frisbee, snowboarding, BBQs and more became commonplace within Burlington's active landscape. As a post graduate he also found his way into social work at a youth outreach center which catered to at-risk teenagers.

After so many years in Burlington Chris still maintained an eager sense to travel and seek more adventure. In between various bouts as a waiter Chris put off finding a career to do a solo cycling trip from Portsmouth to New York City, a four month backpacking trip in Europe, and a summer as a white water rafting guide on the American River in California.

After much freedom and reflection, Chris has found a home at ReVision Energy that satisfies many of his personal goals. As a PV Solar Installer he is able to balance his ability to see new places, do physical work outdoors, learn a variety of valuable trade skills, and most importantly, to be on a team that so greatly values the importance of protecting our environment and planning a sustainable future.