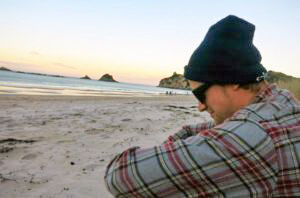 Brooks grew up in the small town of Contoocook, New Hampshire. He spent most of his childhood exploring the White Mountains and Lakes Region of New Hampshire while playing a variety of sports. Many summers were spent camping on the islands of Squam Lake, canoeing the Connecticut River, and spending time with family on Lake Sunapee and at the Isles of Shoals. Brooks went on to attend Bates College in Lewiston where he studied American History, focusing on bands of Native Americans in the Dakota Territories in the aftermath of the Civil War. Through Bates, Brooks was also able to accomplish one of his lifelong goals, living in New Zealand for several months.
After graduating from Bates, Brooks headed to Saddlestring, Wyoming to visit historic landmarks that he had studied and to begin work on a dude ranch. After a very long and hot season at the ranch, Brooks returned to New Hampshire to work as a caretaker and property manager at St. Methodios Faith and Heritage Center, a wilderness retreat center for non-profit groups. Working at the center allowed Brooks to spend a lot of time outside and connect with a wide variety of people.
After several seasonal stints during college at the center followed by a full time position, it was time for Brooks to move on and he decided to relocate to Portland in search of greater employment opportunities. He began his time with ReVision in July of 2016. Outside of work, Brooks likes to spend time with friends hiking and skiing as well as seeing his extended family who are spread across the Northeast.